The Day of the Doctor | Doctor Who at 50 Years 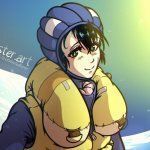