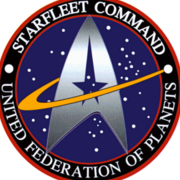 Space... the final frontier... In the furthest reaches of the Beta Quadrant the Federation has establish a presence to explore regions of the galaxy which had been closed to them before the Peace and subsequent Alliance with the Klingon Empire. One of these regions between the newly opened Shackelton Expanse and the Romulan Empire is the Bifrost Nebula and the unexplored spaces beyond. This Game will be based in this Frontier. The Lonley outpost and research base Deep Space 3-9 also known as Asgard Station, located in orbit of a blue and white binary sytem at the edge of the Bifrost Nebula. Asgard Station is the furthest outpost of the federation in the known Galaxy. Here Star Fleet and Federation scientist and explorers are pushing the boundaries outward. And it is here that Star Fleet will do it's duty to seek out strange new civilizations and boldly go where no one has gone before... STAR TREK: DESTINY

This is a Play by Post game where the players take on the roll of the crew of a Federation Starship assigned to the furthest reaches of the galaxy. The game itself will be using the Star Trek Adventures Rules by Modiphius

The Game will begin in the time frame of 2368/69 corresponding to the 5th season of TNG and the first season of DS9.

While removed from the main stage of the television series the events of those series will have impact and Familiar adversaries and allies will make appearances.

The Main Characters will be crew members of the Starship Destiny, a New Orleans class vessel, assigned along with several other starfleet ships to support and explore this newly opened frontier. Their Base is Deep Space 3-9 also known as Asgard Station.