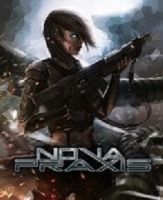 Nova Praxis is a post-singularity sci-fi setting that explores transhumanism and post-scarcity societies against a backdrop of action, adventure, conspiracy and intrigue.

Earth is lost to us, but even in the aftermath of this terrible tragedy, we grow, evolve and even prosper. We have witnessed the death of our mother and the birth of a new era.

In what might have been the end, the synthesis of biology and technology proved our salvation. Augmentation, ranging from basic genetic manipulation to Apotheosis, set us on the path of prosperity. But it also emphasized the importance of identity, individual humanity, and the purity of the species.

The loss of Earth and the resulting Exodus gave us an opportunity to start over with a clean slate. And we seized it.

Though the need for organization, stability and a reliable government was clear, the old ways were seen by most as archaic, clumsy and too prone to corruption.

It was time for a new way… a Nova Praxis.

Today, social networks allow the will of the people to be measured instantly, accurately and without the need for representation. The Coalition, guided by the collective voice of its people, has established new homes on worlds lit by new suns. Molecular assembly technology has made it possible for society to provide a quality of life never before imagined, at essentially no cost, to everyone.  And we are virtually immortal.

But can this would-be Utopia last?

Corruption in the Coalition government fosters decay from within. The Houses, our benefactors and patrons, run shadowy networks of intrigue, espionage and assassination. Apostates, non-citizens, condemn those who would trade their privacy for the Coalition’s false security. Remnants of Earth’s old governments wage an unrelenting guerilla war on Coalition forces. Ideological extremists commit acts of terror using the latest horror to spring from a factory or test tube…

And the value of a human soul is weighed and measured in lines of code.

Nova Praxis is a post-singularity sci-fi setting that explores transhumanism and post-scarcity societies against a backdrop of action, adventure, conspiracy and intrigue.