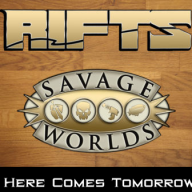 It is a world broken and reformed, where the coming of interdimensional rifts to the planet Earth has created a world of magic, psionics, and advanced technology, a world of infinite possibility that now seems so far out of reach. The Coalition States is victorious over Tolkeen; the Federation of Magic is on a campaign of unity against its neighbors; hate and fear, never far away, are a more constant presence than ever. In the middle of nowhere, a small group of people cast away by the political machinations of war are going to find themselves at the center of all of it.

The war is over, and the wrong side won.

Tolkeen, a bastion of magical theory and learning, where mystic practicioners, other-dimensional refugees, misfits and malcontents could live in peace, was forced into warfare with the human supremacist Coalition States, who had recently begun expanding after years of consolodating their gains and delving into Golden Age technological stores to upgrade their weapons and robots.

The people of Tolkeen knew what occupation would mean for an empire founded on the notion of the eradication of anything that didn't fit the Coalition's narrow definition of sentient life, so they used every means available to protect themselves, including long-forbidden magics involving blood sacrifice and pacts with ancient demons. They told themselves it would be worth it when the Coalition was driven back, that the metaphorical (and sometimes literal) genies could be put back in the bottle.

It wasn't enough. The Coalition was battered, but ultimately triumphant. Tolkeen was razed. The monsters it summoned now roam free; the people clinging to it for stability are scattered and being hunted by the Coalition. The cyber-knights have been shattered, with a significant number having joined the Tolkeen war effort and having lost their way; no one has seen or heard about their founder, or his closest associates, in many months.

Even more troubling, Lord Dunscon - self-proclaimed ruler of the Federation of Magic - has begun a campaign of consolidation of his own, seeking to unite the cities of the Federation of Magic under his own tyrannical rule, pointing out that if the only alternative is destruction by the expansionist Coalition States, his rule will at least allow free cities such as Dweomer and Stormspire to exist - even if it is the rule of a man whose chief criticism of Tolkeen was that it was too soft.

Some people joke that the second apocalypse is upon us. But it's a joke no one laughs at. Those outside the borders of the Federation and the Coalition wonder if they'll be next, and what, if anything, can be done about it. Those within said borders who don't toe the party line are wondering where they can go. Everything in North America is in flux, and no one knows what will come out the other side.

A sizable settlement called Prince's Landing, chiefly an argicultural and mining town. The primary crop is barley, and the local stout is noteworthy; the primary mining export is a vein of zinc which is often used in the maintenance of advanced technology. Limited robotics are used to mine, and the local hedge mage has helped ensure that harvests are reliable.

It's a relatively small town, and like most small towns in the world of Rifts, can't affort to be overtly picky about who stays there - many don't have the power to resist powerful forces such as pilots with their own power armor suits, or mages with a reasonable grasp of spellcraft, and as long as people are willing to work or have credits to spend, people tend to live and let live. There is reasonably close proximity to a ley line, but it's a weak ley line and it hasn't caused any trouble in living memory.

However, Prince's Landing is sandwiched in between the two Coalition states of Missouri and El Dorado, and to the east is the Federation of Magic. Furthermore, their two major trading partners - the city-states of Kingsdale and Whykin - are on opposite sides of "the Coalition issue," with Kingsdale a more tolerant city and with Whykin more fully embracing the Coalition ambassadors that come calling. The current mayor of Prince's Landing favors Kingsdale, but without any support from any other major powers, the Coalition could decide to wipe them both off the map with ease - and many people in Prince's Landing are in favor of taking Whykin's side, with hate crime incidents on the rise. The d-bees and freethinking scholars and radicals in the region are all waiting to hear a metaphorical pin fly out of a possibly literal grenade.