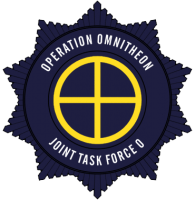 Operation Omnitheon, first formed in 2013 was created to assess all supernatural threats to the United States and her Allies, a continuation of an allied effort of many Pantheons from around the world in the monitoring and elimination of threats and the assistance of lone Gods or Goddesses bereft of their pantheon. Cracks formed in the barriers between godrealms and the mortal world during the cutting of the threads of fate that could have led to Ragnarok during the end of WWII, allowing forgotten gods, rogue titans and their spawn, and unusual supernatural happenstances to occur in the Mortal realm.

Humanity itself isn't even vaguely aware, only for a brief time they attributed some things to the appearance of "Superpowers", but that wasn't the case. The age of superheroes was short, from 1949 to the mid 1950s when the cold war changed matters.

Around this time the US along with it's allies in Europe and Asia and their corresponding Pantheons created "Joint Task Force 0", allowing pantheons to exchange their serving Military Scions from their home militaries to team up with other countries to suppress oddities and put a cap on supernatural attacks. It was effective, the public forgot there were those more than Human walking among them, and the things that go bump in the night were just in their head.

But as the Zeitgeist came to a head at the turn of the Millenium, the number of people running into godly occurances dramatically jumped. The greatest tragedys were the 2011 Earthquake and Tsunami, triggered by a aquatic Titan, and several natural disasters that popped up around the world soon after.

The vast majority of people were still unaware that the supernatural even existed. Chalking up these events to bad luck or the changing climate. The world Pantheons, now unfettered by cold war distrust formed a new alliance. Operation Omnitheon. Now with Pantheons once alligned with the former Soviet Union were allowed into the program.

And none too soon, when a "Meteor" exploded over a Russian town, hardliners tried to claim it was a US weapons test and it took several diplomatically leaning scions to calm things down, but it was becoming clear, Fortean events were increasing.

When Operation Omnitheon formed, they picked from the best and brightest they could find. That... is the team forming now... A new legend for a new era is starting. Whan lies ahead for Joint Task Force Zero?